What’s the perfect first gun to protect the Jewish home? To find the answer we consider some (good-natured) Jewish-American stereotypes:

1. Jews are not mechanically inclined. We call the handyman to change a light bulb. Then we complain that its too bright.
2. We expect our Jewish mothers (or wives) to clean up after us.
3. We’re cheap!

Now before you report me to the ADL, keep in mind there are many exceptions. For example, my wife will testify under oath that I own and use power tools around the house, and I still have all my fingers (sometimes I actually succeed in fixing something!). However, she’ll also tell you (2) and (3) still apply.

So taking these things about ourselves into consideration, the perfect first gun to defend our Jewish homes is a revolver. All kidding aside, I recommend revolvers for home defense to everyone, no matter what their level of firearms experience.

What do revolvers offer that other platforms do not? Most people can figure out how to load a revolver without any instruction. To use it, just aim and pull the trigger. No safeties to forget under stress, no jams to clear, no failures-to-feed, and if you ever have a “dud” (primer fails to fire the round), just pull the trigger again. Revolvers tend to be a little heavier than other systems, which makes them easier to shoot because there is less felt recoil. Revolvers require very little care. I’m never going to tell you not to clean it, but the truth is many revolvers can go thousands of rounds without any cleaning or oil, and still function when called on.

Also, revolvers are very easy to train new shooters on. They can be dry-fired on empty (check three times to make sure your gun is not loaded, i.e. all chambers of the cylinder are empty, before you do this at home) repeatedly, whereas other platforms require you to reset the hammer every shot. When you’re at the range you can randomly load spent cases into the cylinder, which will allow you to see whether or not you’re flinching (a very common problem for new and experienced shooters alike). Revolvers can also be fit with laser aiming devices for farsighted shooters, and lasers are also are great for dry fire training. If you don’t want the gun loaded in the house, there are devices called speed loaders that are simple to use in emergencies.

Which revolver? For the home, a great solution is the Smith and Wesson 686, with a 4″ barrel, chambered in .357 magnum. These can be had new for less than $600, and used for $400 and up. Speaking from experience, S&W’s customer service is excellent. The great thing about a .357 is that it will also chamber rounds called “38 special“. 38 specials are the same diameter as a .357 round, but the case is shorter and the round is less powerful. You can practice with 38 specials, because they are cheaper than .357 ammunition and will not produce as much recoil. You can experiment with your own abilities to accurately use “full house” .357 ammunition, or you can choose to load your gun with 38 specials or 38+P and still have a round with very effective stopping power.

With a revolver, your brass (spent cartridge) remains in the cylinder. When you go to the range, bring a coffee can or put your brass back into the bullet box…don’t leave it on the floor at the range. Why? Because there are shooters who will pay you for your once-fired brass! Competition shooters re-load their own ammunition, and once-fired 38 special cases are a great find. Don’t be shy to ask for $1 per 50 empty cases, but be willing to take as low as $0.50 depending where you live. Think of it as a dollar off coupon when you buy ammo! (Just make sure that selling spent brass casings is legal where you live.)

So how does a nice Jewish boy or girl get started in sporting marksmanship?

There is no simple answer. First and foremost, do your homework and don’t rush into any equipment purchases until you’ve sought out tons of advice and know what you’re getting into.

The most important thing is to find someone knowledgeable about shooting sports in general, and have a long talk with them. There are so many different shooting disciplines that finding one appropriate for your personality and circumstances is an individual quest.

There is a great resource on line in PDF format, called The Art of Shooting. It is a long book, but will give you an overview of many of the different modern shooting disciplines. Give it a good skimming, and absorb what you can.

An important consideration will also be what facilities are available in your local area. Go online and use search engines to locate local clubs. Finding a good club is also crucial, because it will be a source of shared knowledge, equipment, and of course camaraderie.

If you need help, of course I am glad to help. Simply post a comment here or email me jewishmarksman at gmail dot com.

Several friends have already forwarded this New York Post article to me, but if you haven’t seen it, its worth a read. I agree with the rabbi’s idea of an armed congregation; the local police are not trained or capable of dealing with a terrorist attack on a synagogue. Notable quote from the article:


“Jews are not like Christians,” Moscowitz said. “If I turn my cheek, I’m coming around to make a kick.”

Check out DoubleTapper‘s blog for pictures of armed congregants at a synagogue in Israel.

My sister-in-law is a nice Jewish girl, proudly married to active service Navy man. She’s been staying in town while he’s at sea, so we were finally able to get her to the range. It was her first time to ever fire a gun.

My wife turned out to be a natural marksman (markswoman?), and I guess it runs in her family. Or maybe I’m just a great instructor? We started her sister out with an air pistol, and in no time she was using my Bullseye pistols like a pro. She shot a Ruger MKIII in .22LR, 38 specials out of a S&W 686, and finally .45ACP from a 1911.

These were a couple of her targets, all from about 50 feet, which is quite a distance for a first-timer. The best part of the story is that we scanned her targets in and sent them as email attachments to her husband at sea, and he and the crew got a kick out of it. Apparently the rest of the crew delighted in teasing him that his 95lb. wife can out shoot him!

So come on fellow Jewish marksmen, make 5770 the year YOU convert another nice Jewish boy or girl to our tribe! 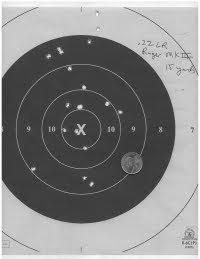 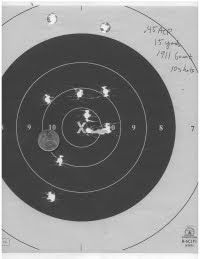 Who was the first Jewish marksman? Why King David, of course! Everyone knows the biblical story of David and Goliath, where the young shepherd slew his mighty foe with a meager sling. Would you believe there is a website, slinging.org, dedicated to this ancient weapon?

Competitive shooters offer a different perspective on this chapter of David’s life. Many people probably assume the story implies that G-d guided David’s stone into Goliath’s head–they view the shot as a sort of biblical miracle. I don’t see it that way. David had probably grown up using a sling daily to drive predators away from his flock. He probably had lots of time to practice out in the middle of nowhere with his flock, slinging away at distant targets to pass the time and focus his mind (we target shooters know that shooting practice clears the mind and develops mental focus). David probably already had the skill necessary to make his Goliath-stopping shot prior to the encounter.

But hitting X’s in practice is one thing, hitting them under pressure is something altogether different! Few shooters are able to shoot as well under the pressure of competition as they shoot in a practice session. The pulse rate rises, the hands might tremor, vision changes, breathing gets shorter, and the weapon just feels different in your hands. It takes time and experience to overcome these problems, all of which are entirely self induced, and often the manifestation of hidden self-doubts. I’ve never been hunting or in the military, but I would imagine the first time you have a living thing in your sights, the pressure is even greater. All too often, the result is a terrible shot.

But David had none of these problems. If you are a Jewish marksman, reread this story you once read as a child. Put yourself in David’s shoes, and try to discover how he was able to make the shot. Please post your comments and insights on the blog!

(If any scholars can point out an earlier example of Jewish marksmanship, please leave a citation in the comments! I vaguely remember there may be reference to archers somewhere in the Torah…)