I’ll be posting results for the Israeli shooters throughout the World Championships, and also for American Dmitriy Schteyman if he did get over to Munich.

In the past two years I’ve had two opportunities to shoot the Israeli Weapon Industries Jericho 941 (a.k.a. Baby Eagle) chambered in .45 ACP. Actually, on both occasions, both were purchased by Jewish friends (against my advice to get a revolver…) who came to my club range with me to shoot the guns for the first time. I can’t say I’ve put more than twenty or thirty rounds through it, but that’s enough for me to form some opinions. On both occasions it was the stainless model. I just shot one today, so I figured I’d share my opinion about this Israeli pistol:
1. Ergonomically, I find it doesn’t fit my hand perfectly, but not terribly. I have small hands, so the trigger on its double-action setting is a just a little further away from where I would like it.
2. The double action trigger is pretty heavy, as heavy or heavier than some of my revolvers…but it is smooth.
3. The single action trigger is nice. It has some take up, then a stop, then some creep before a clean break. I think many people will not feel the creep, and will like the single action trigger.
4. The sight picture is decent for a combat pistol.
5. The gun is light, which is an issue shooting full house .45acp and felt recoil, which is stout.
6. It never happened to me, but when my friends shot it they had failures to feed and a stove-pipe…I saw this on both new guns. It could be the gun needs to be broken in, the tolerances do feel very tight. It could be my friends limp-wristed it, not being used to .45 recoil.
7. Those tight tolerances yield a very accurate off-the-shelf gun. I could consistently hit an 8″ steel plate at 50 yards with whatever cheap ball ammo the friend bought. At 15 yards I was putting up 2 handed groups within 2-3″.
8. I did take one bulls eye style shot, one handed at 15 yards and just had to take the target home (click to enlarge): 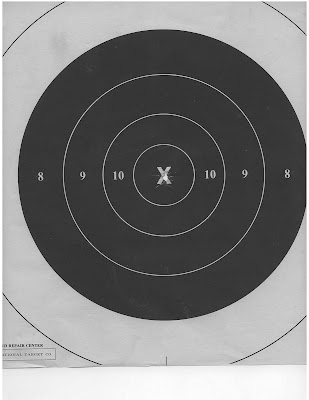 Would I buy one or recommend one? Probably not. I don’t like guns that fail even occasionally, and I don’t like the idea that a defense gun needs a “break-in” period. To me the gun is a little light for .45, I’d rather carry a heavier gun and deal with less recoil. If you’re going to carry a light .45, you might as well carry a more reliable compact Glock. There are better weekend range guns in .45, like the tried and true …any 1911.

That being said, I’d be open minded about the Jericho in 9mm, where I think the gun’s weight wouldn’t be such an issue. When someone refuses to get a revolver and wants a recommendation for a semi-auto, I just tell people to make their lives’ simple and get a Glock or a Sig Sauer…you can’t go wrong that way.

Air pistols and dry firing is peaceful and meditative, but as a shooting buddy likes to say, “It just feels good to shoot a big gun.” And today I felt like making some noise. I had a bunch of loose .45 and 38 rounds lying about, just begging to be shot.

First up, .45ACP from a S&W 625 revolver. I have been thinking of doing a monthly Bullseye match at my local club, and using this revolver for the .45 or center fire stages. With the right loads, this gun is a tack-driver. For a few months now I’ve just been dry firing the gun while watching TV, figuring it was a good way to strengthen the trigger finger as it has a heavier pull than any of my other competition guns. So I brought along my shot timer to see if I could at least get off 5 rounds in 20 seconds for timed fire. I only had 18 loose rounds lying around, but here was the result (ignore the .22 holes, I recycled someone’s used target): 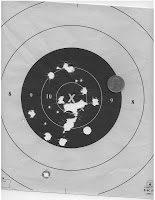 That target (click on it to enlarge) was 18 shots, one-handed at 25 yards, double action. I shot sets of 5 shots under 20 seconds. I’m pretty happy with the results (the 7 at 7 was a sighter). I’m going to work up a lighter load and see if I can bring my times down under 10 seconds for the rapid fire stage. I’ve thought about thumbing the hammer, but my hand is a little small for the N-frame 625, and my double action technique keeps getting better, so I’ll just stick with that. 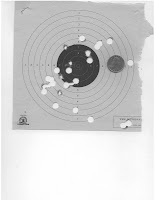 Don’t let anyone tell you snub nose revolvers are not accurate…that target (I used a 10m AP target) was shot two handed at 50 feet, double-taps. I’ve shot the gun out to 25 yards at it groups well, I’ve also hit steel plates consistently at 50 yards single-action. The rear sights are simply a notch in the frame, so you have to use Kentucky windage to deal with distance, but otherwise the gun will shoot.
Lastly, I wanted to put a few rounds through my wife’s gun, a S&W 686 .357, with 38 specials. This is our home defense gun we keep loaded with .357, and the main gun my wife practices with. I had not shot it much actually, but here’s how it went at 50 feet with double-taps two handed: 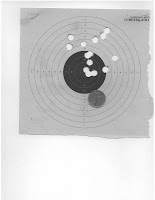 Sure enough, turns out that gun is a tack driver too! So I decided to put out a target at 50 yards and shoot it one-handed. After I got it sighted in, the gun was clearly 10-ring accurate…so now I may have a second center fire gun for Bullseye matches.
I’ll clean these guns and put them away again, maybe after I accomplish what I want to in High Power rifle I’ll take up Bullseye pistol seriously. For now, I’ll just keep up with 10m air pistol. I have been practicing, just have not had time to shoot a 60 shot match but hope to soon! 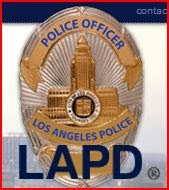 Today I bring you an interesting Jewish marksman. From Wikipedia:

Emil Harris was the only Jewish police chief in Los Angeles, California. He was appointed to serve for one year from 1877 to 1878. He was born in Prussia and immigrated to Los Angeles in 1869. He helped create the city’s first volunteer fire department. He began on six-person police department where he quickly became a deputy chief. The Yiddish-speaking cop became chief after his leadership in the Chinatown massacre of 1871. He was also a detective. His conduct during the capture of the horse thief Tiburcio Vasquez in 1874 at the present-day intersection of Santa Monica Blvd. and Kings Road led to his promotion to chief.

He had a really amazing and colorful life as a law man, discussed in an article at the Western States Jewish History web site. The article is really worth reading, especially the parts about the Chinese massacre (As a side note, I have always thought that relations between Jews and Chinese have had an interesting history, both in this country and world wide. I joke with my wife that I want our daughter to someday marry a Chinese Jew…). Harris sure had some adventures…and a sense of Yiddish humor. But he was also a skilled Marksman:

The Turn Verein Germania [(sports club)] had a military section. The rifle division listed its officers in 1876: Emil Harris, captain; Conrad Jacoby, lieutenant; E. Neitzke, sergeant; W. Marxsen, first corporal; and Charles Gollmer, second corporal. When Captain Harris received his sword it was in time for the May Day parade in which he led the Turn Verein’s military company. When the rifle section planned target practice in East Los Angeles at their own shooting range, Harris assured the public, through the daily press, that every precaution was taken to prevent accidents and “that it is utterly impossible for anything of an untoward nature to happen.” To accommodate the expected crowd at the rifle practice, “Trains on the East Los Angeles Street Railroad will run every half-hour.” The shooting match in the fall of 1876 saw Emil Harris win the top award, the silver medal for rifle marksmanship. “He has to win once again when it will become his permanent property.” In the summer of 1876, Harris had been re-elected to another six months term as rifle section captain. In 1902, J. M. Guinn recorded that Harris was one of ten to organize “the Turner Germania, which has grown to be a very important organization, with five hundred members.”

The Western States Jewish History page is very interesting…I always enjoy reading about Jewish life in America outside of New York and Florida!

Mazal Tov, and good luck to all the Israeli shooters in Munich!

P.S. I had a Service Rifle match today and did very, very poorly (well, for me anyway)….blah.

What a way to get ready for the big Munich event next month! Guy Starik took 2nd place in 50m prone rifle with a 597- 41x. He was actually running in 6th place, but under the pressure of the final round got the top score so he moved up in the ranks. Mazal Tov! Note the ISSF web site has videos of the finals to see him in action.