Jewish markswoman Laura Spector is blogging again. As we covered here a few months ago, Laura is a Jewish Olympian who competes in a demanding shooting sport, the Biathlon. Train hard and keep em in the X-ring!

May the new year bring health and happiness to you and your loved ones. (And in the new year, may all your shots find the X-ring!) 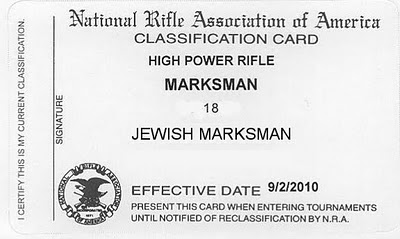 This weekend I had a good Service Rifle match, shooting a 90% average, two levels above my classification. I am currently classed as a Marksman, and hope to be ranked as an expert before the end of the year. The NRA classifications for High Power rifle are:
Basically, when you compete in NRA sanctioned matches, your scores get sent in to the NRA. After three matches within a class you get moved up (never down) and the NRA sends you a classification card (and some cool stickers). I think it is a really good system, albeit imperfect. Once you get your card, you can take it with you to any NRA match in the country as proof of your classification.

The secret to my jump? No secret, just routine practice and finally getting my act together on the line. I think it has now been my 6th or 7th match, and it has taken me that long to get all the little distractions eliminated. This last match was the first time I felt I could just focus on shooting and not be bothered by things like the spotting scope, how much time I had left, how many rounds I’ve fired, etc. The only ongoing distraction is my glasses, which are my daily wear glasses and tend to fog under safety goggles and get annoying drops of sweat on them. Once I get that problem solved I can start shooting for Master! Well, first let’s get that Expert card by shooting 90%+ consistently!

As for Air Pistol, that has fallen to the side for a while I focus on Rifle. I just don’t have the time to keep getting better at both disciplines at once.

If you are a Jewish shooter with an NRA classification, please use the comments to post your classification and the discipline you earned it in! 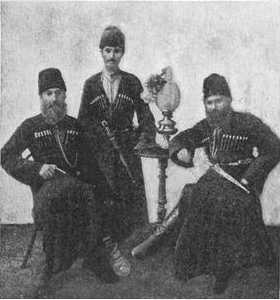 What is a “Mountain” Jew? According to Wikipedia:

The name “Mountain Jews” or “Caucasian Jews” is something of a misnomer, as it does not include Georgian Jews of the Caucasus Mountains.

In terms of ethnic origin, it is assumed that the Mountain Jews and Tats have inhabited Caucasia for a long time. Their distant forefathers once lived in southwest Persia, the south-western part of present-day Iran. It was there that they adopted the Middle Persian language. The predecessors of the Mountain Jews settled in Caucasian Albania in the 5th–6th century and from that time on their history has been related to the mountains and the people of Dagestan.

After fleeing persecution in Persia, they migrated north to mountain villages on both sides of the high peaks between the Black Sea and the Caspian. They still speak a dialect of Persian and few Juhuri know more than the odd Hebrew phrase.

For centuries Qırmızı Qəsəbə (also known as Krasnaya Sloboda in Russian) in Azerbaijan – perhaps the only completely Jewish settlement outside Israel – kept its traditions intact, surrounded by Muslims. The fall of the Soviet Union, however, in 1991 prompted a mass exodus. In recent years, the population has plummeted as inhabitants emigrate to Israel, America and Europe. It is the last stronghold of the Caucasus Mountain Jews, or Juhuri.

The number of Juhuro in the Caucasus regions outside Azerbaijan is also declining rapidly. In neighbouring Russia, the threat of Islamic fundamentalism[verification needed] and other violence has forced thousands of Mountain Jews to emigrate from Dagestan. In April 2003, vandals desecrated 42 Jewish graves in the region.[1]

I encourage you to go read the Wikipedia article or this one here. There is also a neat book, with great pictures called Mountain Jews: customs and daily life in the Caucasus By Le’ah Midash-Shema’ilov, Liya Mikdash-Shamailov, Muze’on Yisra’el, much of which can be browsed through google books here.

And the connection to Jewish Marksmanship? According to one article:

“[l]ike the Khazars, the Mountain Jews were ‘skilled horsemen and expert marksmen‘. They loved horses and nature. Mountain Jews knew the value of self-defense and carried and owned many weapons (especially daggers).”

It seems like in all of the historic pictures of Mountain Jews online, the men are carrying long daggers and belts or outer pockets to accommodate rifle bullets. Mazal Tov! 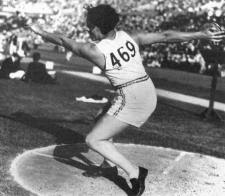 Lilian Copeland was a top US track and field athlete in the 1920′s and 30′s. She excelled in the weight throwing events like discus and shot put, but also in javelin. She boycotted the 1936 Olympics because of Hitler and the Nazis. However, we at the Jewish Marksmanship blog are far more interested in her later police career, where she worked for the LA County Sheriff and “qualified as an expert marksman in 1938, scoring 274 points out of a possible 300 in a sheriff’s department competition.”

She is the second Jewish law enforcement officer we’ve covered here, the other being Emil Harris.