Readers may recall that I recently discovered a newspaper clipping that announced the 1965 Maccabiah Games pistol team. Apparently, one of the team members, Ronald Krelstein, was already profiled by fellow Jewish Marksman, Hap Rocketto. From the CMP website:

Distinguished Rifleman 1995, badge number 1169, as Ronald D. Krelstein , of Germantown, TN
Disginguished Pistol Shot 1964 as Ronald D Krelstein , of Germantown, TN
The following biography was written by Hap Rocketto and CMP Staff
Ron Krelstein is a Double Distinguished shooter. He earned his Distinguished Pistol Shot Badge in 1964 and, after an arm injury, took up service rifle shooting in the 1990s earning his Distinguished Rifleman Badge in 1995. Krelstein has international experience and, as a member of four United States Maccabiah Teams between 1965 and 1984 he won, ten gold medals, two silvers and one bronze.
His other shooting accomplishments include membership on two United States gold medal winning team as the Benito Juarez Games in Mexico, four times National Collegiate Pistol Champion, National Rifle Association All American, Presidents Hundred with both rifle and pistol, and a holder of National Records with both the pistol and rifle making him, along with Mel Makin, one of only two people to have that distinction.
Krelstein, a practicing attorney, has donated two major National Trophy Pistol Match Trophies. In honor of his mother he presented the Rose Krelstein Trophy in 2007. It is awarded to the High Woman in an aggregate of President’s and National Trophy Individual Match scores.
To honor Gaspar Perry Defino, his, “friend and mentor for 50 years” Krelstein donated the Gaspar Defino Trophy to be a be awarded to the High Junior in the National Trophy Individual Pistol Match in 2009. Defino, a long-time United States Navy pistol shooter, was the first Interservice Pistol Champion, Double Distinguished-earning Pistol in 1955 and Rifle in 1959, winner of the U.S. Military Police Corps Trophy, Ancient Archer Trophy, and Orton Trophy and a 2650 three-gun pistol shooter
Krelstein credited DeFino with “selflessly sharing his knowledge and experience with new shooters and older shooters alike.” He noted that, “while this trophy bears his name, it also honors all of those who serve as mentors to those just beginning this sport.”

Today’s Jewish shooter is Abigail Fong. The web site of the school she works at tells us this about her:

Abigail Fong – Instructor Mathematics
Abby graduated from Princeton University in 2010 with a degree in Philosophy. While an undergrad, she also completed her pre-medical requirements, which were a constant reminder of her love of math and science. As a high school student Abby was a straight A math and science nerd, which led her to start tutoring in those subjects, an activity she has continued to perform. Currently, Abby is working toward her MBA at UCCS. She has always seen math problems as fun, abstract puzzles and Abby is a girl that loves to solve puzzles. She also loves to help students learn to see the fun and challenge in math, and to help them learn to solve those problems for themselves.
Abby is also a competitive rifle shooter on the US team. She started shooting with her dad and her sisters when she was young and has been at it ever since. It has been a great experience that has allowed her to travel all around the world, a couple of times actually, competing in places like Beijing, Sydney, Munich, Plzen, and London. Some of her achievements in shooting include: many national records, national championships, and a 4th place finish at the 2008 Olympic Trials.

Abby also spoke out when London, host of the 2012 Olympics, reversed its misguided policy that would have discouraged young people from watching shooting sports at the Olympics (free tickets were being given to kids, but they were prohibited from using the tickets to watch shooting sports):

Actions like this show a complete lack of understanding of our sport. Preventing kids from being exposed to shooting as a sport maintains the fallacy that all shooting is like a Sylvester Stallone movie. Target shooting is about control, focus and precision. As a sport, we have among the lowest injury and drug usage rates, and among the highest participation by country of any sport. It’s sad that the Olympic organizers feel the need to “shelter” kids from something that could be an amazing, positive experience.

Mazal tov to all three of the Fong sisters, and thanks again to the anonymous reader who provided the tip on them.

Today we profile another shooter in the Fong family, Danielle Fong. Danielle is a member of the USA Shooting team, and their web site tell us this about her:

Danielle Fong is a standout young athlete on the Paralympic shooting scene. Most notably, she made the 2008 Paralympic Team and finished fifth at the 2010 World Championships in the Mixed Prone (R6) event. Born three months early, Fong was diagnosed with cerebral palsy and shoots IPC events (R2) Women’s 10m Air Rifle, (R6) Mixed 50m Rifle Prone and (R8) Women’s 50m Rifle Three Position. When she was a young child, she had to overcome a re-implanted trigger finger after an accident. National Paralympic Coach Bob Foth commented on Fong’s tenacity as he said, “She’s a very tough competitor and extremely motivated to succeed.” Fong advises junior shooters to “practice hard; set realistic but high goals; be brave.” Fong’s two older sisters, Sandy (National Rifle Team) and Abby (National Development Team) are both involved in competitive rifle shooting. Fong got started in the shooting sports when her father set up an air rifle range in the family’s basement and encouraged Danielle to shoot bench rest with his air rifle. Armed with her Anschutz 2002 air rifle and Anschutz 1907 smallbore gun, Fong continues to aim for a spot on the 2012 Paralympic Team. A self-professed chocoholic and work-out fanatic, Fong also shares her family aptitude for music as she plays trumpet in the Columbia Marching Band.

Her competition highlights include:

I also found an interesting article about the Fong sisters’ relationship with Olympic swimmer Dara Torres (who is Jewish by the way…), involving Torres giving the young girls her gold medal! 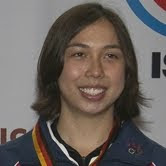 Thanks to an anonymous reader who brings us today’s Jewish Markswoman, Sandra Fong. Sandra is an Olympic caliber shooter. She is sponsored by ammunition manufacturer Eley, and is profiled on their web site with some of these highlights:

Some brief biographical information is given as well:

Sandra grew up in New York City where shooting is largely unknown. Her dad had done ROTC in high school and decided to compete again 25 years later, it was a sport he wanted to share with Sandra’s sisters and herself, and began taking them to the range when Sandra was 12. It began as a hobby, but as Sandra and her sisters showed a talent for it, shooting soon became a family sport.
Sandra’s father coached, and she was lucky enough to train alongside her sisters; Abigail Fong (USA National Development Team) and Danielle Fong (2008 USA Paralympian). Not many get the opportunity to work with world-class competitors as training partners so early on; and they really pushed each other to succeed.
Sandra qualified for the 2008 Olympic Games in her Senior year of high school, and is currently studying Anthropology at Princeton University, and training for the 2012 Olympic Games.
Did you know?
• Sandra has an interest in writing and filmmaking
• She is an avid music lover who sings and plays the piano and trumpet. She is currently teaching herself guitar
• Sandra was accepted in to the Mount Sinai School of Medicine early

Sandra is also profiled on Princeton’s web site, which tells us:

Fong is also an exceptional student. In her sophomore year, she was accepted to medical school for a unique Humanities in Medicine program at Mt. Sinai School of Medicine. She says her academic interests straddle medicine, journalism, film and anthropology. One of her favorite courses has been a radio journalism class with visiting lecturer Dan Grech ’99, a Miami-based reporter for NPR’s “Marketplace.” At the end of the course, students were required to make a two-hour radio show integrating their reporting, production and pitching talent.

Sandra’s Rabbi had this to say about her and her sisters:

“We are so excited” about Fong’s success, says Rabbi Jonathan Stein, spiritual leader of Shaaray Tefila. “The daughters are top-notch kids. These are kids who are post-bat mitzvah engaged” in synagogue life.

Mazal tov to Sandra, and I will profile her sisters soon! Thanks again to the anonymous reader tip!

I stumbled across this old news clipping from the Pittsburgh Press dated July 25, 1965, which identifies the 1965 Maccabiah Games Pistol Squad:

I will try to research Ronald Krelstein, Lester Baer, Charles Denis, Norman Ricker and Edwin Markowitz, but as usual, I appreciate any tips the readers can give!