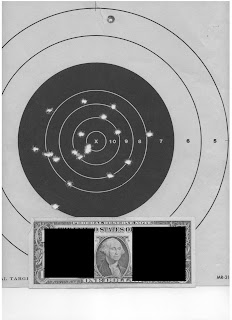 A couple weeks ago I used the Israeli Mauser as a match rifle in an NRA 100yd High Power match.  I have some bugs to tweak still, too numerous to mention.  But there were moments when I and the rifle performed really well together, and a few club members were surprised by the Mauser’s accuracy.  The image above was my prone target.  I was still trying to get the windage zeroed during the match, and my head position was very inconsistent as I am still trying to find a good position on the rifle.  But you can see the gun generally groups well, and there were a few shot sequences where I got 3 or 4 shots on top of each other in a row before I made windage adjustments to try and zero.  Windage zero is very hard to get on the rifle because there are no clicks on the screw used for adjustment, so I have to move by trial and error.
I’ve hooked the Mauser up to the scatt system for dryfire practice, and that has been a big help in getting a consistent head position.  I’ve also been experimenting with different apertures in the Mojo sights. My offhand scatt scores are approaching the low 90% on the scatt, and I have a good feeling that in a few months I’ll be able to shoot an Expert class score with this rifle.
I’ll post more soon about the sling solution I came up with.
P.S. More than a few club members were surprised by how well the Israeli Mauser shot.  One fellow Jew in the club was downright proud.  We have LEO and former military who come to the club and it takes some time before they can shoot an AR-15 that well in competition.  One non-Jewish member expressed a keen interest in acquiring an Israeli Mauser as a result, partially because of the history but also the appeal of a Mauser action in .308.
P.S.S.  No idea what happened on the flier at 12 o’clock.

July has been a busy month on gunbroker.com for Israeli Mausers!  Today someone listed a great-looking one (link).  At this moment, price is $550, I suspect it will end up selling over $700.
However, as always, buyer beware!

For some reason, Israeli Mausers on gunbroker.com tend to run in bunches…you’ll see 3 or 4 in one month, then see none for months at a time.  So here we have another.
There is a new listing up now (click here).  The rifle is stamped 1939 with a beautiful Star of David stamp as well.  In the picture, the bore looks decent.  The “matte hard chrome finish” does not look appealing to me in the pictures, perhaps it looks better in person.  Typically the finish is a dark brown parkerized or bluing, so I’m guessing collectors would be turned off.  Also, one typically wants the sights to be black so they stand out against the white target background, although a hunter or other kind of shooter might be ok with the sights the way they are.  The stock does look nice.  I ignore any seller’s claims of a firearm being a “tack driver” unless they provide a target or otherwise clarify.
As always, good luck and buyer beware.

Today on gunbroker.com someone has listed another Israeli Mauser.  This is the first time I have seen one with the Mauser logo on the receiver, as typically there are only factory stamps which allow one to (sometimes) date the receiver.  In the 6th picture there appears to be a Star of David stamped on the receiver but it is hard to tell…I would ask the seller for better pictures of all the stamps.  I doubt the sling is original, probably a reproduction as it looks too nice.  I also notice that the stock does not have 7.62 engraved in the underside.  Not a bad looking rifle, but as always, buyer beware!

Currently on gunbroker.com someone is selling a Mauser advertised as a Colombian-Israeli Mauser (click here).  The receiver bears a Colombian crest in the photos.  The seller states “my research indicates that this rifle is a known and legitimate Israeli conversion.”
The rifle is interesting, but I would be skeptical and ask the seller to document his research.  I am absolutely no expert, but I have read many articles online about the Israeli Mausers and never read about anything like this.  It could just as well be that someone cobbled together a Mauser by using an Israeli stock (which did have the 7.62 branded into it) and a surplus 7.62/.308 barrel, along with the Colombian receiver.  Many of the Israeli Mausers have been parted out, so it is not uncommon to find “Frankenstein” Mausers that use Israeli Mauser parts.  Or maybe the Belgian factory had some extra Colombian receivers around, and sold them to Israel?
Personally I would not have an interest in this rifle, but a serious Israeli Mauser collector might want to do his or her homework and take a look.
Update 8/25/12: Sold for $455.  Not surprising given its oddity.