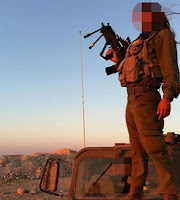 The story below is a tale of two Jews.  We Jews often face a choice as to what kind of people we are when our enemies seek to destroy us.  I sometimes wonder if G-d has decided there will always be these two types of Jews among us, but I firmly believe He give each Jew a choice.  Read the story, and decide what kind of Jew you want to be, and how you will raise your children.  And of course, may you have a meaningful and reflective fast tomorrow!  From Yoav Zitun onYnetnews.com 09/24/12:

Soldier who killed terrorist recounts events leading to attack on Egyptian border; says ‘I did what had to be done.’ Meanwhile, it has been revealed that another female soldier hid behind bush during incident, was feared to have been kidnapped Yoav Zitun.

As the story behind last week’s deadly terror attack on the Egyptian border unfolds, Corporal S., who has been commended on her performance during the incident, recounted the chain of events for the first time.
S. said that even after seeing Corporal Netanel Yahalomi shot dead in front of her, she did not hesitate to attack the terrorists.

“I didn’t think twice. I jumped out of the hummer and did what had to be done. I ran under fire until I reached Netanel, but when I saw his condition, I told my commander there was nothing we could do to save him and we must move on,” she said.

S. explained how it all began: “All of a sudden we heard a female soldier shout on the radio ‘We’re under fire.’ I then told the driver to drive to her location. We didn’t know what to expect. It was the battalion’s first encounter with terrorists.”
S. said that while driving to the scene, she thought of her parents. “I was also worried about the soldier on the radio. The whole unit deserves praise, not just me. It takes a lot of courage to remain calm under pressure.”

S. finally said that she was very proud of herself. “It is a privilege. Not everyone goes through such an ordeal.”

Corporal S. further said that she did not always want a combat position in the army. “Initially, I wanted to be a paramedic but I later realized that I wanted to have a combat role.”

She emphasized the importance of serving in a combat unit and contributing to the State of Israel.

Meanwhile, as the investigation continues, the IDF has learned that not all soldiers followed protocol during the incident: One of the soldiers, who was afraid of facing the terrorists, hid behind a bush throughout the attack and stayed there even after it ended.

According to the investigation, the soldier was in a patrol jeep when the shooting began. She immediately called it in and informed her superiors.  While other soldiers were under fire, the soldier in question hid behind a large bush for an hour and a half.

Shortly after the attack, as the unit commander began “counting heads” in order to see if all members of the unit were there, they were stunned to realize that one of their own was missing.

They immediately thought that she had been kidnapped by the terrorists and taken into Sinai.
Helicopters and search units were immediately called to the scene to search for the missing soldier. She was later found by her commanders, dehydrated behind a bush.

The soldier said she was afraid to shoot back at the terrorists out of fear a “gun fight” would commence. “I thought I didn’t have a chance against them.”
The soldier was reprimanded by her commanders shortly after.

An initial military investigation launched into the incident reveals that the terrorists took advantage of the arrival of African infiltrators and the fact that IDF soldiers left their post to offer them water.  The terrorists then emerged from their hiding spot, approached the four fighters who remained at the post and opened fire, killing Yahalomi. 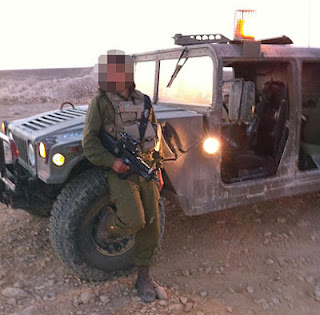 Another Israeli Mauser up on Gunbroker (click to see it).  This is a pre-WWII rifle with supposedly matching serial numbers on parts (which collectors love).  This is a rifle that Mauser collectors will love, but for me it lacks some vavoom because it doesn’t seem to have any stamped out Nazi emblems that the later Mausers have.  If you look carefully there does seem to be a Star of David and some other Hebrew letters, so that’s cool.  This is the kind of Mauser that is really outside my ability to estimate a price, because my guess is it will draw in collectors, and also I’ve grossly underestimated in the past what collectors will pay for matching numbers.  It seems to me that the sling and stock are probably not original, and the finish seems a different color (more green) than most Mausers I’ve seen so I wonder about that.
As always, I have no connection to this auction and buyer beware!

L’shanah tovah to all my readers!
This week I have only a brief status update.  Please be on the lookout for Jewish Marksmen/women for me to profile, it has been a while since I’ve shared anyone new with you and I need my readers’ help!
Before the last High Power match, I added a slip-on rubber recoil pad to my Israeli Mauser.  I added the pad not for its recoil absorption (which I found to be minimal) but rather because the end of the butt stock is smooth metal and was slipping on my shooting coat, especially in the prone position.  The recoil pad has sticky rubber base that solved the problem.  I shot the match and scored 77%.  During rapid sitting I lost 20(!) points by not getting off 2 shots in time.  I still think an 85%-90% match is feasible with this 70 year old rifle.  The problem is not so much my bolt cycling speed, rather it is getting my head back into position after moving it out of the way of the bolt.  With the short sight radius, head position errors are unforgiving.  I am also tensing up a bit during the standing phase due to recoil.  My first five standing shots were 10s, but then I started anticipating recoil and the group opened up.  I’m going to try a regimen of visualization before the next match to avoid this accuracy killing tension.
I found that stabilizing the butt stock lead to more slippage on my shooting glove, exacerbated by the smooth finish on the stock.  So now I have added course grip tape used on skate boards to the bottom of the stock so my glove can really get a stable hold without me having to squeeze.  I also added a moleskin strip to the comb (the part of the stock where you rest your head) so my check can get a firm weld.
I am eager to make that 85% match happen so I can retire the Israeli Mauser to the safe for a while.  My new High Power match rifle is waiting patiently, and I’d also like to spend more practice time with my small bore prone rifle.  At the last prone match I performed some experiments and made some major changes in the position…although my score did not reflect it I think I made some major progress. 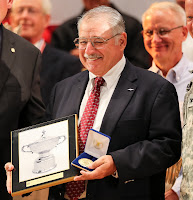 From a recent report from the Camp Perry National Matches:

Held July 19th through the 24th, the Smallbore Rifle Position Championships are a part of the NRA National Rifle and Pistol Championships conducted at Camp Perry, Ohio each year. Comprised of a Metallic Sight and Any Sight championship, each day competitors shoot 40 shots prone, 40 shots standing, and 40 shots kneeling at a target whose ten ring is the size of a dime. Competitors take a total of 240 shots in six fired matches over two days at a distance of 50 yards-the width of a football field-using both metallic and  telescopic sights.

Rocketto trailed the senior leader by 17 points after the first day’s metallic sight competition. On the second day, telescopic sight competition, he steadily made up ground in spite of heavy winds, eventually passing the leader to win the senior any sight championship and, with it, the senior grand aggregate by 14 point margin.