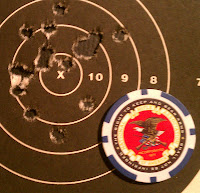 As loyal readers know, last month I finally teased an Expert class score out of the Israeli Mauser, and decided to end that adventure.  I have basically been out of “serious” competition for almost a year, but had a lot of fun and changed some local club members’ perspectives on vintage rifles.  So this month it was back to business, sort of.

So the new rifle?  It’s a Remington 700 action with a 30″ .308 barrel with a palma chamber, housed in an Eliseo RTS tube gun chassis.  I will take a picture when I can.  The tube gun chassis allows me to adjust just about everything on the rifle to fit me perfectly, and I’ll blog in the future about all the different tweaks and experiments I’m tyring.  This is a bolt action rifle, and I’m using “irons”, aperture sights front and rear with adjustable irises but no lenses.
Actually I used most of the month to do an annual tune-up of my pistol proficiency, and didn’t really touch a rifle until a week ago.  I only got in about 4 dry-fire sessions and never practiced any rapid fire with the bolt.  I was really just hoping to go to a local 100yd reduced match and get a good 100yd zero, so I would be good to go for a real XTC course.  Once you have a good zero at one distance, it’s fairly easy math to at least get “on paper” at other distances.
But notwithstanding the lack of practice, I shot very well.  Offhand I tied for the best score, just a 187 but that’s not shabby.  Actually I would have done better, as I shot a couple of 8s before I realized that my rear sight had wiggled loose.  Things wiggling loose would be the theme of the day, as both the front sight, rear sight and butstock wiggled loose, each in a different stage of the match.  Basically I just need to apply some lotctite to the sight base screws, which I’ve been avoiding until I’m sure I have the sight exactly where I want it.
I finished the day with a Master score, and a great 197 prone score, shooting the target above.  There are actually 20 shots there, compared to a typical poker chip.  You can see how the pattern sort of slants upwards, which is probably the path my pulse beat follows.  I have a different sling on the shelf to try and see if it does a better job of dampening the pulse, as the one I have now, the strap that wraps the arm is directly connected to the strap that hooks to the rifle, making it easier for pulse to transmit from my bicep area.  It was nice not to shoot any 8s or 7s, something I could never quite do with the Israeli Mauser.
Rapids were a bit of a challenge, as the new bolt is not as smooth as the Israeli Mauser’s bolt.  I also had some issues with the magazines until I figured out which one was sticking, and just used that as the last magazine in the bunch.  My rapid scores were a little sub-par, but once I get that knack of that bolt things will get better. Not having to move my head from the rifle makes such a huge difference over the Israeli Mauser.
I think 2013 is going to be a great year, and I’m confident this rifle will get me to High Master, or at least give me a fighting chance.  There is still a lot to tweak, but I’ll get there.  In the meantime, I do plan on shipping the bolt out to have some work done, as the primers are cratering too much.  Apparently Remington has been widening their firing pin holes for some reason, and while this may not actually ever result in a pierced primer, it still makes me uncomfortable.  I’ll talk more about this in a later post.