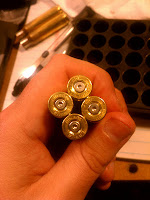 I’m slowly getting accustomed to the new match rifle, this weekend we’ll see if some of my tweaks have helped.  However, one of the issues it had did not affect shooting, but was potentially a safety issue.  Click on the photo at left to enlarge, and you can see a difference in the primer strike pattern between the two cases on the left and the two on the right.  The two on the left have a “crater” pattern, with a pronounced rising ridge.  The two on the right have a nice primer “dimple” strike.

On most rifles, cases showing a cratered primer pattern indicate that the chamber pressure is getting high, perhaps dangerously high.  However, in my case, I was using relatively mild hand loaded ammunition.  In fact, when my gunsmith assembled the rifle and test fired with factory ammunition, he reported the same cratering.

I did some initial internet research, and found this is an increasingly common “problem” with Remmington bolts.  Apparently, Remmington is making the firing pin holes larger than they used to, and what happens is that pressure from the fired round causes the metal case of the primer to “flow” inside the firing pin hole a bit. This is what happens with an over-pressured round in a “normal” rifle, but apparently it happens with Remmingtons with standard, safe pressure loadings.  Most owners reported this as an annoyance, but nobody reported any problems caused by it.  Rumor is that Remmington argues this makes primers less likely to pierce…I’m skeptical (both that they make this argument, and that it is correct).  Looks can be deceiving, but it seems to me the primers on the left are more likely to pierce than the ones on the right where the primer cup is more intact. If a primer pierces you get hot gas directed in the wrong direction!

The problem I see is twofold besides potential for piercing.  For one, now there is one less indicator that indeed a hand load round is over pressure limits…the cratering is a false positive.  Second, which is not really a “problem”, but anybody who picks up your brass at a match will think your rounds are too hot.  This happened to me, and the shooters next to me were concerned, and rightfully so…if my rifle blows up they are in the shrapnel zone!  I convinced everyone my loads were light, but the cratering still bothered me.

So I ended up sending my bolt to Greg at Gretan Rifles.  Greg does some kind bushing to the firing pin hole and turns the firing pin, basically making hole smaller.  He had my bolt back to me in under a week and everything worked great, as you can see the primer strikes on the right from the exact same load.  He even has a web page to explain the process, although he was more than happy to explain it over the phone.  It was $82, arguably unnecessary, but to me it is worth the piece of mind, and I’m very happy with the result.