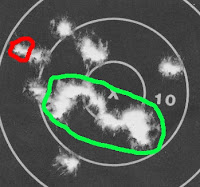 The hole circled in red was the one that got away.

A few interesting things to point out.  First, this was the first outing with ammo that I “fixed” using my new Hornady concentricity tool.  Within the green circle there are roughly 12 shots,  and I’ve never shot a group this tight at 100 with this rifle.  I really did not expect the concentricity tool to improve much at 100, but I think it did.  Maybe a .5 minute adjustment to the right and I might have squeezed in a clean 200.  Hopefully this will carry over to the 600 yard line later this month.  The second remarkable point is that although I practice on the SCATT system several times a week, I almost never practice prone or sitting (only off hand), and haven’t for several months.  Nonetheless, my prone and sitting scores keep getting noticeably better in matches.  Meanwhile, my off hand scores, while ever-increasing in practice, a sinking and unpredictable in matches, primarily due to nervousness at the outset of a match.  It confirms the belief that skills gained in offhand carry over to other positions, I just need to get my head on right in the off hand phase.  I’ll write more about the mental management training I’ve been exploring in future posts.

Third, I think the biggest factor is my becoming more particular and consistent with head position on the rifle, and maintaining it during a shot.  I’ve tightened up my cheek weld slightly, and maybe become slightly more concerned with keeping consistent head position than whether the bull is perfectly centered.  I think the outer 10s and the 9 came when I got a tired and a little sloppy with head position, although I still find that after 12 shots or so my body wants to fight that .308 recoil, and I start to anticipate the muzzle blast.  That is why the shots tend to go up from that centering point.  I think the next match I will take a 2 or 3 minute break after the first 10 shots to allow my body to recover and see if that helps.