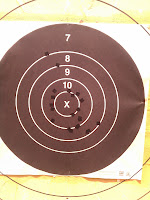 Today we had a “practice match” to get the local shooters headed to the Nationals at Camp Perry ready (I’m not going this year).  I started the day rather poorly, and could not figure out what was off.  I eventually figured out that my front sight post was loose with the match almost over.  Oh well, I tightened it down and things went back to normal when I hit the 600 yard stage.

The sight was dialed in for the 600 yard prone stage.  I was eager to see if the concentricity tool had done anything to improve the ammo.  Luckily, the way the pit rotation worked out, I was able to take a picture of my target with the pasters marking my hits.  You see, the way NRA High Power matches work is that competitors take turns doing “pit duty” behind a safety berm, where they raise and lower the targets, marking hits with a large colored disk in between each shot.  This is because it would be almost impossible to see your hits at 600 yards without a humongous spotting scope, but an inexpensive 20x spotting scope can easily pick up the marking disk.  Well anyway, usually I never go back to the pits after my 600 yard stage, but this time I did and was able to see my group as opposed to just one shot at a time.  For perspective, the 10 ring is 12″ wide and the X is 6″.

So I ended up shooting the same exact score as last time (a personal best at 600 yards), a 193, which is pretty good.  I had one mental lapse and shot a 7, and man, if I could have that shot back I could have done 195 or better and been in High Master territory.  Even if that 7 had broken the 8 line I would have had a personal best at 194.  Oh well.  I also got a little lucky where that high 9 just barely stayed in.  It was also very hot and humid, so I was soaked with sweat under my shooting jacket, which makes the sling and shoulder feel unstable–I found myself breaking position to reset things more often than usual.    Otherwise, as you can see the group is relatively tight in the 10 ring.  It was just one of those days where the shots just circled the X ring.  So I think the concentricity tool may have helped slightly at 600 yards, maybe .25MOA or so.  One thing I am now convinced of is that my rifle and ammo are capable of shooting a “clean” (all 10s), take out the human error and the rifle seems to want to shoot 1MOA or less at 600 yards.  I just need to make that happen.  The load I’m using is a 155gr Nosler HPBT bullet, with 43 grains of 4064, which is a mild load.

It was an overcast day and we got all are shooting in before the storms came, here is a view of the range with the targets hidden in the pits.  You can see the wind flag off to the left, very little wind, mile 3-5 mph gusts that I just waited out and shot during lulls: 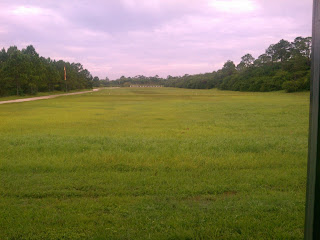 One thought on “Jewish Marksman’s Day at the Range”