As I discussed in previous posts, according to Lanny Basham’s Mental Management system, one of the keys to my shooting better in competition is going to be changing my Self Image circle.  In order to shoot 96+ standing in competition, I need to inherently believe and expect that is exactly what will happen, because “it’s like me” to to shoot 96+ in competition.  Basham sets forth a technique to get there called the Directive Affirmation:

The Directive Affirmation is a paragraph written in the first person present tense that describes a person’s goal, pay-value of the goal, plan to reach a goal and habits and attitudes affecting the goal.  It is rehearsed repetitively, causing the Self Image to change.

So following his steps to develop the Directive Affirmation:
Step 1. Define the goal.  To always shoot 96% or better in the standing stage at matches. [This is only 2 points higher than my personal best, lower than my bests in practice, and only 1 point higher than my practice average.  I think it is realistic and achievable.]
Step 2. Set the time limit.  March 31, 2014.  [I shoot 2 matches a month, so by that time, I'll have shot 16 matches, assuming none get rained out or other interference.  This is plenty of time.]
Step 3. List the personal pay-value of reaching the goal.  I have taken my next step toward earning High Master classification.  The personal pay-value of earning High Master is:

Step 4. Outline the plan to achieve the goal.

That’s it!  As for the Mental Program, that is basically a mini-mental rehearsal for each shot.  I have started using this technique but not consistently.  Sometimes my mind is just blank, which is OK I think.  When I find myself thinking about anything else, I run the Mental Program.  It is probably better to run the Mental Program every shot, so I will start keeping track.  Basham gives a Mental Program for shooting in his book, so I’ll just use that.  Basically, you just visualize yourself and how you feel after making a perfect shot.  Then you visualize yourself doing it.  Then you focus your attention on what you need to do to shoot and shoot.

Readers following the blog know that I have been struggling to get my off hand scores in competition to match my practice scores.  Put another way, I have not been shooting as well in competition as I do in practice.  This past weekend’s match was a typical example.  My first two sighter shots standing were a 10 and an X.  I was calm and focused for my first record shot, a 10.  Then suddenly my pulse began racing, and I shot two 8s. Those two 8s were a sort of pressure relief valve, letting me be calm again.  My next 6 shots were 9-10-9-10-X-10.  So not withstanding the two 8′s, my score is 84, with a potential 94, which would match my personal best in competition.  For my final shot I was not nervous, but somehow shot high with a 7, finishing with a 91.  In practice I am shooting 96+, and there is no logical reason I shouldn’t be shooting at least that well in competition.  In fact, I have the SCATT set to make it harder to score in practice.

Enter Lanny Bassham and his “With Winning in Mind” book and Mental Management CD seminar.  Bassham is a former Olympic gold medalist in shooting, who developed a “mental management” system for training the brain for top performance.  I first read his book several years ago, and dismissed it as Tony Robbins-like feel-good nonsense.  But recently I read the autobiography of former Navy Seal sniper trainer Brandon Webb, and he wrote that initially he had the same doubts about Bassham, but sniper trainees were greatly benefiting from Bassham’s books and CDs, setting new course records.  So I decided to give Bassham another shot, and was able to find his seminar CDs for sale used, from a very accomplished shooter who gave the CDs high marks.  It turns out that Bassham’s CD seminar goes into much more detail than his book, and won me over to try it.
The core of the system is Bassham’s model of mental performance.  He identifies three “circles”, the conscious, the subconscious, and the self-image, which need to be in balance.  The conscious and subconscious circles are fairly self-explanatory, i.e. the former is focus and concentration, the latter is the muscle-memory skills developed through hours of practice and repetition.  But the self image circle?  Bassham says that how you see yourself influences how well you will shoot, and that self image will propel you or pull you back.  Even if you have the conscious and subconscious ability to shoot 96+, if your mental image of yourself is that you typically shoot 92, you will typically shoot 92.  If you start shooting better than that, your nerves and subconscious will pull you back.  If you start shooting worse, you’ll focus more and bring the score up to that average.  Your self-image basically anchors your performance, in that you will experience debilitating discomfort and distraction any time you are shooting worse, or motivating energy when shooting worse, than your expected performance.  Bassham says that shooters with my dilemma are very common, he calls them the “frustrated experts” who shoot outstanding in practice but not in competition.
The key, according to Bassham, is that I must change my self-image.  The practice data says I can shoot a High Master off hand score.  So why shouldn’t I think of myself as High Master off hand shooter?  If I really saw myself as a High Master off hand shooter, then I wouldn’t start to get nervous as soon as I start shooting well off hand in competition…after all, shooting 10 after 10 in competition is normal for a High Master.  I know I can shoot High Master scores in prone.  My first 9 shots prone this weekend at 600 yards were 10s and Xs, and I didn’t get nervous or flustered…that’s “like me” to shoot well prone…I finished this weekend at 96%, just shy of High Master.  I have to convince myself that it’s “like me” to shoot well standing off hand.  In other words, make my self-image guide the scores, and not the other way around.
Bassham says the self image can be changed, and he sets forth a plan and techniques to change it.  The first step is to write down an “affirmation statement” that is sort of the goal to be achieved.  I want to re-read what he says about developing that statement before I write mine out.  More to follow…

This weekend was a turning point in my shooting development.  I am now convinced beyond any doubt that I have the technical skills to shoot at the High Master level.  What is lacking, and what I need to change, is my mental preparedness to shoot at that level.  This post I will illustrate the problems, and in subsequent posts I’ll discuss my progress in training techniques, all coming from the “With Winning in Mind” books and tapes of Lanny Basham.

Readers know that I recently gained insight into my standing off-hand technique by watching video clip of Israeli shooter Sergey Richter.  My most recent match started very well.  As a reminder, I am using a .308 bolt action rifle with metallic sights.  My two sighting shots were both 10s, just a little left (this was a 100 yard reduced match, so the 10-ring is 3.35″ and the X is 1.35″) : 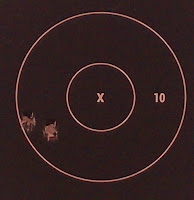 So I adjusted 4 clicks to the right for my record shots, and the first two were on the money: Now it hits me.  For off hand shooting, both my sighters and record shots are super tight.  My zero is near perfect.  My hold today is super tight and slow.  I could shoot a perfect target if this keeps up….

My pulse starts to pick up a bit…but I use some of the relaxation techniques  know, and continue shooting, but I sense my hold is widening:

Ouch!  That shot was barely on paper, and counts as a miss.  My concentration was so intent on my new trigger technique, that I abandoned my prior mental shot plan which involved an anti-flinching step, as well as dry-firing my fifth shot, and as a result, flinched on the shot.  Ok, no biggie, I can recover, and my next four shots found the 9 and 10 ring: 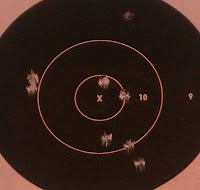 Well that made me feel much better!  That’s a target on pace to shoot a 85 or 86, which is still good shooting, and I think to myself, without the miss it would be 95 or 96, which is damn good.  So on my final shot what should happen but: 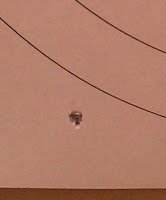 Yep, another off-target miss caused by flinching, because I forgot to dry-fire a couple shots to immunize myself.  Lesson learned.

But despite the rough start, I did fairly well in the sitting and rapid-fire prone stages of the match.  Then came prone, where I continue to get better and better each outing.  The first 17 shots, I did everything mentally right, had no thoughts of score, and shot all 10s and Xs.  Then I started to think about the fact that I might be about to shoot my first clean target.  I considered not checking the scope any more for the final 3 shots, but decided that would be a “cheap trick” and should just shoot as normal.  Shots 18 and 19 disappeared into the 10-shot hole I was building around the X-ring, and this is what I saw in my spotting scope: 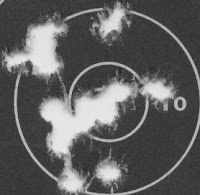 Just 1 more shot…1 more and after years of competition I’ll finally have a clean target!  And guess what I did:

Arrghhh!  Never mind that I haven’t shot an 8 at 100 yards for months.  It’s all a blur now, I can’t even explain how it happened.

Anyhow, the point of the pictures above is to demonstrate my need to win the mental game–I’ve got the physical skills.  In future posts I’ll talk about what I’m doing to get there.  Wish me mazal tov!

As readers know I’m not exactly in a rush to go out and buy a Tavor.  But right now it’s one of the most sought after rifles in America.  Here’s a great video from MAC, where Tim visits Tel Aviv and takes a tour of the IWI factory where Tavors are made.  Very cool scenes from Tel Aviv, very clean and efficient factory, full auto demos of the Tavor and other Israeli-made rifles…what more can you ask for!  Check it out:

The Tavor is proving to be quite the Israeli ambassador!