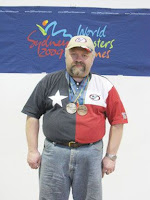 This article in the Jewish Herald Voice describes US Olympic hopeful Dmitriy Shteyman, an American Jew (via Ukraine and Russia) with his sights set on competing in the 2012 Olympics in London. From the article:

Shteyman is a championship pistol shooter and instructor, and his latest target is the 2012 Olympics in London. The Jewish shooter took part in the 2008 Olympics in Beijing, China, as a member of the USA support team, but hopes to make it as a shooter in 2012.

“This is my third chance to make the Olympic team, and it’s always a once-in-a-lifetime opportunity,” Shteyman said. “I’m very excited to be able to compete against the best shooters in the USA.”
…
Shteyman, who has worked as a programmer/analyst for SYSCO Corporation for 13 years, is a bronze medalist in the USA Shooting National Championships and two-time national record holder.

He also coaches kids ages 8 to 18 (including one Jewish girl) at the 4-H Shooting Sports Club in Rosenberg. One of his 18-year-old students, who he has been teaching for three years, is a national juniors champion in the 25-meter Rapid Fire Pistol.

The article also mentions that Dmitriy will be going to the World Championships in Munich this year, so I will report on him as well as the Israeli shooters at that event.