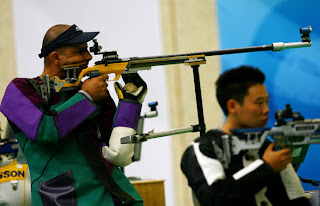 Israeli Doron Shaziri lost his left leg to a Lebanese land mine. But that has not stopped him from becoming a champion Paralympian rifle shooter, and earning medals in numerous Paralympics and other international competitions. In 2008 he won the Silver in Men’s 50m Free Rifle. Interestingly, in 2008 Shaziri provided the Jerusalem Post with some insights into the lack of support from the Israeli government for top-tier disabled athletes as compared to “able bodied” athletes:

DORON SHAZIRI has already proven that he is one of the best shooters in the world. He has been competing since shortly after losing his left leg in Lebanon in 1987 when, during the course of his military service, he stepped on a land mine. Now he is heading to his fifth Paralympics, having already collected silver and bronze medals in the 1996, 2000 and 2004 games. But the bull’s-eye in his free rifle competition is only 10 millimeters across – smaller than a one shekel coin – so the margin of error is minuscule. And since his training is hampered by financial constraints, he isn’t taking anything for granted. “I would prefer to train more often, and to travel to more competitions,” he says. “If I did, I would be better, without a doubt. Yes, I am good, and I have won medals. But you can’t rely on talent alone.” Shaziri settles in for a four-hour training session in Herzliya, one of only two or three he is able to manage each week. That’s half as many as the members of the able-bodied shooters, he notes, but he can’t afford to do it more often. No one repays him for his time away from work, designing custom wheelchairs for handicapped athletes. “I don’t even get the stipend that I’m supposed to receive as a top-tier competitive athlete, because there’s no budget for it,” Shaziri says. “I’m not crying and whining, that’s just the situation for handicapped sport in Israel. I mean, apparently, sport just isn’t very important to the State of Israel. If no money is budgeted for it, what other conclusion can you draw?” Without a major boost in funding, Israel may very well see talented handicapped athletes abandon their sports entirely. Shaziri has already seen it happen in his own sport, which requires a heavy investment in a highly specialized bolt-action rifle and other sophisticated, sport-specific equipment.
…
Shaziri, for example, exudes the kind of positive attitude that most able-bodied people would do well to adopt. “Right after my injury my first thought was, ‘I wonder how my prosthesis will work,’” he says, leaning nonchalantly on the metal pole and prosthetic foot that prop him up. “Look, my leg isn’t going to just grow back. So what? Why should I remain disgruntled and depressed all my life?”
…
“We are not ‘handicapped’ athletes, we are athletes. Why discriminate against us?” “Sport is sport, no matter whether it’s handicapped, and it ought to be promoted,” adds Shaziri. “The state ought to be proud of its athletes’ accomplishments. After all, we’re proud to represent the country. Isn’t the country proud to be represented by us?”

I was not able to find any recent articles about whether or not the funding situation has changed, but I hope so. Also no word on Shaziri’s plans for the 2012 London Olympics. While it is important for Israel to be represented on the world’s mainstream athletic stage, disabled athletes should not be brushed aside, especially when they are IDF veterans!

As a side note, here in the US the NRA devotes considerable resources to making shooting sports accessible to the disabled, devoting an entire department to that purpose. They hold competitions for wheelchair competitors, many of whom are veterans returning from the Afghan and Iraqi wars against radical Islamic terrorists. Precision shooting is a great way for anyone with physical limitations to stay active in sports, and is even used as a form of physical therapy.

Mazal Tov to Doron, and hopefully he will be bringing home a gold in 2012!