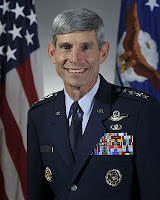 Wikipedia tell us that:

Norton Allan Schwartz (born December 14, 1951) is a United States Air Force general who is serving as the 19th Chief of Staff of the Air Force. He previously served as Commander, United States Transportation Command from September 2005 to August 2008. As Chief of Staff, he serves as the senior uniformed Air Force officer responsible for the organization, training and equipping of nearly 700,000 active-duty, Guard, Reserve and civilian forces serving in the United States and overseas. As a member of the Joint Chiefs of Staff, the general and other service chiefs function as military advisers to the Secretary of Defense, National Security Council and the President. He assumed his current assignment on August 12, 2008.
…
Schwartz grew up in Toms River, New Jersey, the son of a typewriter salesman. The first Jewish Chief of Staff of the Air Force, Schwartz was a member of the U.S. Air Force Academy Jewish choir before his 1973 graduation. In 2004 General Schwartz was awarded the Jewish Community Center’s Military Leadership Award. In accepting the award, General Schwartz said he was “proud to be identified as Jewish as well as an American military leader.”

That’s all well and good, but most important to this blog’s readers is the fact he earned the Small Arms Expert Marksmanship Ribbon.

The ribbon is awarded for proficiency with either a service rifle or handgun, but we don’t know which one in General Schwartz’s case. I do not see a bronze service star on his ribbon in the photo, which would indicate he earned the ribbon with both weapons. I suppose for now it will be a mystery that perhaps one our readers can shed some light on!

Thanks to reader Brad_in_MA for suggesting a profile of General Schwartz!