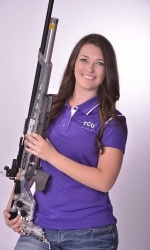 Hannah Black is a freshman at TCU (the Horned Frogs) and a member of the women’s rifle team.  Her TCU web page describes her prior shooting accomplishments:

Earlier this week, Hannah was named a TCU “athlete of the week”:

Black competed as an individual in the air rifle competition at the NCAA Championships. The freshman posted an aggregate score of 594 before advancing to the finals and shooting a 100.8 to finish in fifth place overall.

Mazal Tov to Hannah!
(Hannah is the sister of Josh Black, another Jewish Marksman).

Josh Black recently represented the tribe at the National Junior Olympic air rifle competition in Ohio, where he “won the championship in the 14-15 age group.” Mazal Tov! You can read all about it in this great article (click). About shooting, Josh had this to say:

“I just love the sport,” said Black, who was introduced to competitive marksmanship as a 12-year-old. “I’ve loved it from the first time I tried it. There’s such a feeling of satisfaction when you hit the target. I enjoy the challenge, too. You’re always trying to do better than you did the last time. You’re always trying to beat a personal record or improve upon your last performance.”

Josh’s father chimed in with his view of shooting sports:

“It’s actually quite a grueling thing,” Scott said. “(Josh) practices five days a week for a couple of hours a day — at least. What he’s doing, basically, is practicing the same thing — over and over and over again. Every other sport emphasizes movement and power, but not shooting. In shooting, the less you move, the better you perform. So you learn to concentrate and really lock in (on the target.) You learn to be calm. You learn to immediately forget a bad shot.”