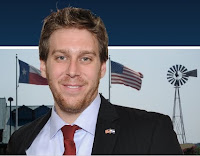 Thanks again to reader Brad in MA for the tip on today’s Jewish Marksman, Itamar Gelbman, who is running for . According to his campaign web site:

Itamar Gelbman was born in the United States and, as a child, moved to Israel with his parents where he grew up. While studying Business Management and Computer Science at Tel Aviv University, Itamar served as an undercover reserve police officer in the Tel Aviv Police Department.
After graduation, Itamar joined the Israeli Defense Force where he served as a lieutenant in the Army Special Forces. For his service he received numerous awards, including commendations from the Chief of Staff, IDF.
Since returning to the United States, Itamar has worked as a security consultant for high profile clientele. He also advises law enforcement agencies on Israeli counter-terror, military and police strategies and border security.
Itamar also serves as a search and rescue pilot in the U.S. Air Force, Civil Air Patrol.
Since starting his first business in 2004, Itamar has created hundreds of jobs for Americans.

Itamar comes from fighting stock. Both parents served in the Army. All of his grandparents escaped from Nazi capture during WW II. His mother’s mother escaped alone from a mass grave in Auschwitz and his father’s parents leaped from the Holocaust train taking them to Treblinka.
Most importantly to our readers though, Gelbman is a Jewish politician who supports the 2nd Amendment, and dedicates a portion of his campaign web site to the issue:

America is the land of the free and home of the brave, as a free and brave man or women you have the right to defend yourself, your family, your property and other law abiding citizens.
A firearm is just a piece of metal. A firearm does not have a mind of its own, it does not make judgments. A human being needs to pull the trigger.
Banning firearms for the claim of “firearms kill people” is just as bad as banning cars or knives for claiming that they kill people. In the U.S.A more people die from car accident over firearm related crimes: An average of over 40,000 people die a year in car accidents compared to 16,000 deaths related to firearm which are not suicide. According to the Department of Justice’s statistics knives were used in 6% percent of the violent crimes that occurred in the USA in 2008 while firearms were used in 7%. This proves that if you want to ban firearms you should also ban knives and cars. Furthermore, banning firearms will NOT stop the criminals from getting and using weapons. Banning firearms will only make the law abiding citizens more vulnerable to attacks. In the U.K. firearms were banned in 1998, since then firearm related injuries more than doubled and firearm related crimes consistently grow every year!

In fact, he is not afraid to put the following picture on his site:

I know I have several readers out in Texas, so take the time to investigate Gelbman and consider giving him your vote!