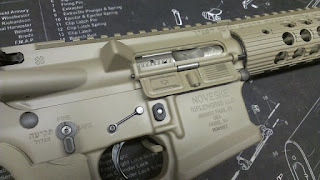 The picture at left and at the bottom of the post (click them to enlarge) are of a Hebrew and Israeli flag inscribed AR-15 owned by Jared Harshaw, who is the owner and operator of Harsh Firearms.  I contacted Jared to learn about the inspiration for the receiver, which was very educational–not so much about the receiver, but of Jared’s religious beliefs (he is neither Jewish nor Israeli).

First of all, let me comment on the fact that I see many parallels between the ignorance and resulting fear that many American Jews have with respect to firearms, and the ignorance and resulting fear many American Jews have with respect to Christian Zionism.  Every American Jew should read David Brog’s book, Standing with Israel (I was sent a free copy for some reason, so there may still be some organizations giving it away, otherwise get it from Amazon used for under $5).  The book gives a basic overview of the theologies driving Christian Zionism (i.e. Christians who strongly support Israel and more specifically, the Jewish State), which is essentially founded in respect (or love) for the Jewish people and their covenant with G-d.  There are way too many uninformed American Jews who think Christian support for Israel is either some plot to convert Jews to Christianity, or a convenient “frenemy” relationship in opposition to radical Islam.  In their minds, all Christians=Catholic Inquisition, just as in their minds Guns=Murder.  Pure ignorance and secular progressive group-think.  And even for those Christian Zionists who believe Jews ought to become Christians…who cares?  If we are really believing Jews, then we should believe that everyone else ought to convert to Judaism!  I see nothing wrong with anyone believing their religion is absolutely correct, so long as that does not imply the use of force or other undue pressure on others to convert.  The entire world is currently threatened by a religion that simply doesn’t grasp that last point.
So back to Jared, here is his response to my inquiry about his AR-15:

Hello, Nice to meet you. My name is Jared Harshaw, I own Harsh Firearms. The rifle is my personal firearm. I’m a Hebraic Roots follower, believe in the holy days and the rest of the commandments found in the Torah. So when I decided to change the upper on my AR I went ahead and re-coated the whole thing. I do a lot of cerakote and came up with the idea as I was trying to put a personal touch on it. Its a good way for the conversation to be brought up when I’m out shooting and a way to educate. Its not finished yet and I just posted a few quick pictures of it. Waiting on the barrel to come in and coming up with an Idea for the Suppressor I have for it. Not really sure what else I can say other than we support Israel and not just with our mouths. Our congregation sends money to Itimar monthly and have had Moshe and Leia come through many times at Bet Ami.  You do a full on interview if you would like, I’m open to every bit of it. I would say the Wikipedia is pretty close to what I follow. Just trying to get out of Egypt per se. Discarding the lies of our fathers and looking to see the lost 10 find their identity and their way home.

You can find the Hebraic Roots Wikipedia page here.  I strongly suggest you take a look and educate yourself.  I am a strong believer that Christian Zionists (including the unfortunate loser of the 2012 presidential election) are the true friends of Israel in the US, perhaps more so than most liberal, secularized Jews.  As for the Hebrew on the receiver, along the top is inscribed Devarim/Deuteronomy 28:7:

The Lord will cause your enemies who rise up against you, to be beaten before you; they will come out against you in one direction, but they will flee from you in seven directions.

The full-auto fire select (which I assume is non-functional?) is Tekiah Gadolah (loosely “the big blast”)…as in the the long blast of the Shofar on the High Holidays!  I believe I first learned of Jared’s lower from a post by Double Tapper. 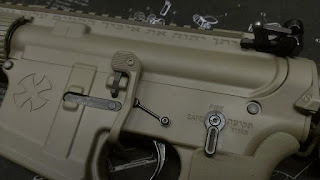 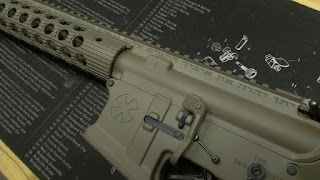