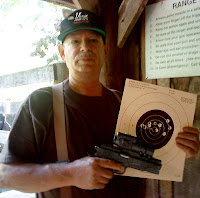 This article is hopefully the first of many where I let Jewish marksmen tell us about themselves in their own words, prompted along by a few questions I sent over. Marty Goodman contacted me after seeing this blog, and graciously agreed to be the guinea pig. Hopefully some of you that have been on the sidelines will volunteer as well! So without further ado, let’s meet Marty!
1. Where did you grow up, and where do you live now?
I was born in Brooklyn, NY Moved to Long Island (Massapequa Park) in 1966, Retired in 2005 and moved to Cookeville, TN.

I was a Graphic Artist, Illustrator and Photo Retoucher, I owned my own company “Retouching Graphics, Inc.”

3. Who introduced you to firearms? How old were you the first time you went shooting?

I started shooting informally in 1958 at 18 years old, my first rifle was a Enfield Jungle Carbine.
In 1968 I went to the Nassau County range and met a smallbore shooter that had been on the St. John’s Rifle Team in college. We stated talking, he invited me to his club meeting, and the rest is history.

4. How did you get involved in shooting sports?

I was a line coach for rifle in the Army, training basic training troops, plus See #3

5. What shooting sports have you competed in? Have you earned any awards or classifications?

I started with smallbore 3 position, air rifle and prone. Made only expert in all 3. I competed in the Maccabiah Games in 1989, (13th)and earned 3 medals. I also shot high power rifle and made master, almost hi-master. I have won numerous awards, too many to count. I have competed at Camp Perry over 30 times, I am going this year also. My highest award and best performance was in the 1000 yard match at Camp Perry, I finished 14th overall out of over 700 entries. I beat many many top shooters. My best achievement is as a coach, I ran and coached the Roslyn Junior Rifle Club over a 30 year period, my goal was to prepare juniors to compete in college. Dozens of my kids competed on top college teams with many getting a scholarship in rifle. All three of my children went to college on a shooting scholarship. My oldest son and daughter went to Tennessee Tech and my middle son went to Jacksonville State University. My oldest son Manny was on the US Rifle Team. Because of a lung problem I can no longer shoot rifle, so I compete in bullseye pistol, tactical matches and SASS cowboy matches. I have numerous NRA, CMP and SASS ratings as instructor, coach and range officer. Shooting has been a major part of my life for 50 years now.

6. What do Jewish family members and friends think about your shooting?

I am very lucky, the largest portion of my family were not liberals, and got a lot of support from them.

7. What do you like most about the shooting sports?

Everything, it builds the best people who lead exceptional lives.

8. Do you have any goals right now in the shooting sports?

My only goal is to keep shooting as long as I can. At my age (over 70 now) goals are hard to achieve. I am in reasonably good physical shape, but age catches up to you. I still work out 3 days a week at the gym. Winning is no longer a need for me, just competing is enough. I also enjoy coaching, teaching and training shooters as much as I can.

9. Is there anything else you would like to say to the readers?

I could never understand why so many Jewish people are such liberals, our enemies know that a majority of Jewish people are against gun ownership. If the Jews in Europe all owned guns, there would be a lot more of us. Long live Israel….