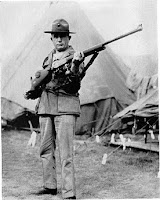 A couple years ago, I blogged about Morris Fisher, a great Jewish marksman.  I picked up his books, one of which is called “Mastering the Rifle” from 1940.  It is full of timeless advice.  However, when I first read the book, one particular nugget struck me as a strange:

Numerous shooters use eye-washes to clear their eyes before they fire in matches, or after the strain of shooting all day.  Cold tea, or one teaspoon of boric-acid to glass of warm water, or a drop of 5-10 per cent argyrol, or any other solution prescribed by a doctor, may be used.

Boric acid?  I know any acid can be diluted or otherwise made to be stronger or weaker, but it just seemed strange to me that competitive shooters back then would put acid in their eyes. However, lately I’ve been using an over the counter product called Systane lubricating eye drops which many shooters swear by.  I looked at the ingredients the other night, and although it is not the active ingredient (polyethelyne and propylene glycol), sure enough it also contains boric acid!  I think I will stick with the store bought drops instead of brewing my own… 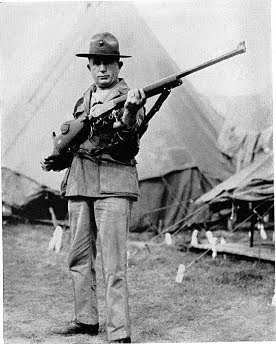 Today on The Rifleman’s Journal (and also here) there is a great story about Morris Fisher, one of the greatest rifle shooters of all time. A summary of the article doesn’t do justice, just go and read it! If you must have the bare bones summary from Wikipedia:

Morris Fisher (May 4, 1890 – May 23, 1968) was an American sports shooter who competed in the 1920 Summer Olympics and in the 1924 Summer Olympics. He won a total of five olympic gold medals. He was the author of Mastering the Pistol (1940) and Mastering the Rifle (1940).
He was born in Youngstown, Ohio, and died in Honolulu, Hawaii. Fisher frequently competed in shooting tournaments while on duty as a United States Marine. He retired from the Marine Corps as a Sergeant Major and in April 2009, he was inducted into the United States Marine Corps Sports Hall of Fame.

So of course I ask, with a name like Morris Fisher….was he Jewish? I believe so, but could not verify 100% using Google. Here’s what I found:
1. Books.google.com gave me some hits, but only snippets are available:
a. American Hebrew and Jewish messenger, Volume 115, Issue 4:

b. Studies in the American Jewish experience: contributions from the fellowship … By Jacob Rader Marcus, Abraham J. Peck:

–>–>Jews and the Olympic Games: sport : a springboard for minorities By Paul Yogi Mayer

2. Aside from the book snippets, a web site listing prominent Jews does identify him as Jewish (go to sports, then shooting).

The snippets from the books are the most persuasive, but if anyone has more proof please let me know! Perhaps someday Google will publish the entire pages…or a Jewish genealogy buff will help me out.