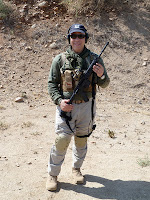 Today’s Jewish Marksman profile is of “Nelson Smith,” which is not his real name but a pseudonym for security reasons.  Nelson is our first 3-Gun competitor profiled on the blog:

1. Where did you grow up, and where do you live now?


I was born in Chicago and I lived there until one month after my Bar Mitzvah. My family then moved to Phoenix due to my fathers employment situation. I have lived in and around the Phoenix area ever since.


I am a commercial airline pilot.


I was introduced to firearms by my father and his work friend (another Jewish guy) who competed in a local “combat” pistol league. I was 13 years old and was hooked after the first shot. I saved up every dime I earned that summer and bought a Ruger .22 pistol that I still proudly own. This is the same pistol that I taught my now adult daughter to shoot with when she was 10 years old.

4.  How did you get involved in shooting sports?

The range that I live by offered an IDPA style match that caught my interest. They offered a one hour class covering the rules, techniques and scoring so I signed up. My first few match scores were horrible but I kept showing up for them. I practiced a lot and closely watched what other shooters were doing. After a few months I found that my shooting was improving and that my scores were as well. Some of the other guys that I shoot with suggested that we try shooting carbine matches and multigun matches. I shot my first carbine match (a charity match for the AzCDL) and did pretty respectable. From there, it went to multigun matches, pistol, rifle and/or shotgun. Most everybody runs M4 type rifles with or without an optic, semi auto pistols and either a semi auto or a pump shotguns. Three gun/multigun is absolutely the most fun a shooter can have!  Three gun matches are shot using a pistol, rifle and a shotgun. Depending on which class you shoot in, you have iron sights, non magnified (red dots) or magnified optics. Some stages involve using one of the three guns and other stages a combination of two or more guns. Targets are a combination of paper IPSC paper targets and steel targets. The stages involve moving from place to place, shooting from behind cover or while walking/running between cover. Shooting positions can be from sitting, standing or prone positions or any combination of. Distances are from a few feet out to several hundred yards. It truly is an ever challenging sport.

5.  What shooting sports have you competed in?  Have you earned any awards or classifications? 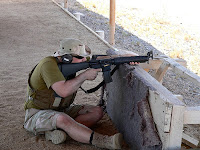 In the past I have competed in IDPA style matches and subgun matches. I currently compete in pistol steel matches and multigun matches. I occasionally drag along my Rabbi friend (who I taught to shoot) to the pistol steel matches. I met the rabbi through a work friend who knew that I was an avid shooter. The rabbi’s friend was killed in the Mumbai attack and he wanted to learn how to defend himself. I taught both him and another rabbi how to shoot and we hit it off as friends. The rabbi got his CCW and I helped him find the right CCW pistol.

6.  What do Jewish family members and friends think about your shooting?


I go to an orthodox temple so most members are “right leaning” Republicans. They not only support the 2nd Amendment but they are also gun owners, collectors and enthusiasts. I have invited a few members to join me but I think they are a bit intimidated by match shooting. I do shoot weekly with a Jewish friend who also shoots matches with me. Over the last six months we have converted his brother from a gun hater to a pistol shooter and an avid sporting clays shooter.  My immediate family members are not active in the sport but will from time to time shoot with me.

7. Any interesting stories about your daughter shooting?  Did she like it?  Does she still shoot?  Grandkids yet?

My daughter is a recreational shooter. She shoots the occasional pistol carbine or pistol steel matches. She also shoots sporting clays several times a month with me and my friends.  No grandkids or husband at this time. She needs to finish college and/or get a job first.

8.  What do you like most about the shooting sports?


Ninety percent of the people I compete with are half my age and many have real combat experience. I like to see where I stack up in the group and learn from what they have learned.

9.  Do you have any goals right now in the shooting sports?


I want to build on the good foundation that I have and to keep improving my overall score. I have worked with multiple coaches and will continue to seek out any expert advice I can find.

10.  Do you reload ammunition or work on your own guns?

I reload 9mm & 45ACP.  I also do most of my own gunsmithing. I have built all but one of the AR rifles that my daughter and I shoot. I also built the Saiga-12 that I use in Three Gun.

11.  Is there anything else you would like to say to the readers?


When I see fellow Jews badmouthing firearms and the 2nd Amendment it makes me sad and ashamed. Hitler disarmed all his countries people and then marched the Jews to their deaths. Can you imagine if those 6,000,000 fellow Jews had the ability to resist their captors? Firearms are not evil, the people who misuse them are. Please join the NRA, JPFO, GOA or any local pro gun organization if you are not a member already. Your kids’ kids will thank you!