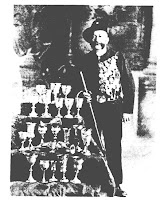 I previously covered Jewish Marksman and lawman Emil Harris, who lived in California in the 1800′s. Today we have another great Jewish Marksman from that locale and era, Philo Jacoby. Philo Jacoby was born in Lebork, Poland, Dec. 5, 1837. In 1859 he immigrated to San Francisco, Calif. He was the editor and publisher of the San Francisco publication “The Hebrew.” Jacoby was also an expert sharpshooter and strongman and started the California Schützen Club. Jacoby died March 25, 1922.
A schützen club is basically a precision shooting club. Jacoby was active in organizing shooting events in the US and took trips to Europe to compete (and win!). There is an excellent article discussing some of his accomplishments (click here) and one story about a shooting competition in Switzerland stands out:

Jacoby next contested one day at the Cantonal shooting a Zofingen where he won goblets and other prizes, and having bought Staub’s Vetter Ii, a splendid shooting rifle in Zurich for 150 francs, he became quite at home in the Numbers. The week following, the great eight-day Cantonal shooting festival in Solothurn took place. From Zurich , Jacoby took the train to the festival place; his car was an open one and when the train entered the station in Solothurn it ran straight into another train left standing on the same rails. All occupants of the open car jumped; Jacoby was one of the first, the fall did not hurt him much but a 200 pound Swiss mountaineer marksman who jumped upon him with the spikes of his boots tore a deep cut in his right hip. Jacoby was carried to the station house where doctors soon attended him, sewed up his wound and made arrangements to send him to a hospital. The accident happened about 11 A. M. and the Cantonal shooting was to begin at 1 P. M. The Swiss marksman (his name was Streif Luchsinger,) who was the innocent cause of Jacoby’s accident, remained with him and helped to make him as comfortable as possible. He said he would leave for the shooting range at 12:30 as he had entered for the first goblet contest. Of course, the writer felt double sore; on his hip and that he should not be able to be at the opening of the festival. He asked Streif Luchsinger to help him on his legs, and when Jacoby found that he could stand fairly steady, he insisted on accompanying his new comrade to the Schuetzen Platz in spite of the advice of the doctors. Streif Luchsinger called a carriage and soon they were at the range. Jacoby’s baggage and rifle had been left at the station and he was supplied with weapon and ammunition by his friend. The contest began for the first goblet. Streif Luchsinger scored the first 100 numbers, and won the honor. Jacoby although somewhat unsteady on his legs, kept pegging away, and when he finally won his goblet (he was 7th on the list) he could scarcely keep upright. Streif Luchsinger carried him, accompanied by great many marksmen, on his shoulders to the Gaben Temple , where the gritty Californian received his hard earned trophy under resounding cheers. Then the doctors got hold of him and brought him in a carriage to a hospital where for the next three days he laid in high wound-fever.