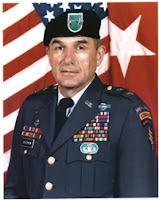 I recently finished reading the biography of Major General Sid Shachnow, a Lithuanian Jew who survived the Holocaust as a young boy.  He eventually emigrated to America and joined the army, and became a decorated war hero and a played an important role in leading and developing the US military Special Forces.

As for his being a Jewish Marksman, Shachnow’s biography reports that he earned both a rifle and pistol Expert Marksmanship Badge, and was a marksmanship instructor at Fort Dix.  Later, at Officer Candidate School he impressed his superiors by taking over a marksmanship class on the spot when the regular instructor suddenly took ill.

The first half of the book is a riveting account of his boyhood life in Lithuania, surviving the Holocaust and hustling to get by in Europe before making it to America.  The second half of the book covers his life in the Army, including joining the nascent Special Forces and serving in Viet Nam.  Shachnow was one of the first group of Green Berets, and eventually rose to play a key role in developing the Special Forces.  Overall, the book was a good read and I am glad I learned about a great Jewish American with a fascinating life story.