Sloane Milstein, as described in this article (another here describing her Jewish background): 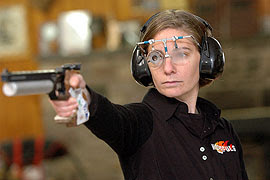 Sloane Milstein is not your typical athlete with Olympic aspirations. At 29, the Northeast native would like to represent her country in the air pistol event at the 2004 summer games in Greece, the site of the first modern Olympiad. However, as the Temple University alumnae points out, she’s in no hurry to secure her place on the national team. “Whether or not I make it to 2004, I think it puts me in a great position for (qualifying in) 2008 because of the all the experience I’m gaining at this point,” she said. Milstein finished 12th in the international style air pistol event at last week’s USA Shooting National Championships in Georgia. She’s been competing actively in the event for six months. “I’m completely happy with that (finish),” Milstein said. “I’m certainly moving in the right direction to meet my goal.” A strong showing at last week’s competition would not have solidified her position on the U.S. national team. To qualify for the 2004 Games in Athens, she’ll need a successful showing in the air pistol events at the upcoming Olympic trials in September. All qualifying meets will be held at Fort Benning in Columbus, Ga. Combined scores from this fall’s trials, as well as the totals from next April’s trials, determine who will represent the United States in Greece next summer. Milstein scored a 350 out of a possible 400 points at the two-day event, finishing slightly lower than the 360 average she’s been scoring since beginning her Olympic quest in December. “That’s what we need to see, a steady improvement,” Milstein said. “It was more important for me to work on some training techniques than it was for me to go after the highest score I can possibly get.” Milstein discovered a knack for handling air pistols while training for the modern pentathlon, a five-sport event that has athletes participate in running, swimming, shooting, fencing and horseback riding.

The articles are old and I couldn’t find any updates about her Olympic pursuits.